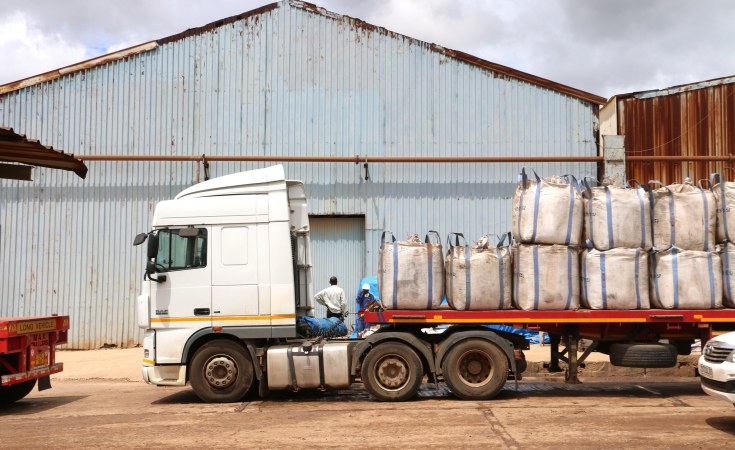 Fairphone/Flickr – Processed cobalt oxide ready for export from a mine in Katanga, Democratic Republic of Congo.

The Democratic Republic of Congo is well-known for being the country with 70% of the cobalt reserves in the world. But it also has several other minerals needed to manufacture batteries – and now the Central African country is moving towards building a regional industry that will enable the DR Congo to benefit from the growing global market worth U.S.$ 261 trillion as the world gradually shifting towards the electric car industry.

Speaking during the DRC-Africa Business Forum 2021 in Kinshasa, Songwe said the DR Congo also has other minerals needed for battery production, as well as participating country Gabon which has the manganese necessary for manufacturing. “In the not-so distant future, South Africa will be part of these discussions because it has more platinum and lithium. What the  The African Continental Free Trade Area is trying to do is add value through our minerals instead of being limited to exporting, which is what the DR Congo, Gabon and South Africa now does.

“If all these minerals can be put together to produce batteries, we are definitely going to have added value,” Songwe said.

She estimates that in ten to twenty years, the demand for electric cars will top 60 million, and she believes there is an existing market for the production of batteries and the DR Congo can tap into it.

“Now is the time to realize the dream that Africa has always longed for”, she said, and it will be done in association with partners like Afreximbank, the Arab Bank for the Economic Development of Africa (BADEA), the Africa Finance Corporation (AFC) and private companies like including Bosch.

“After the signing of commitments in Kinshasa, they are now working with the government and Congolese commodity trading and mining company  La Générale des Carrières et des Mines to  provide access to the mines. Then will be the most important step of looking for investors. Studies have shown that the DRC is more competitive than the top battery-producing countries – the U.S, Poland and China. Investing in battery production in the DRC is three times cheaper than in the United States, for example,” she said.

Songwe said they are in the process of seeing how to structure the investment. “Who will be the ‘anchor investor’? That is, the one who will invest more in order to attract others. We think that with the four structures that we had here, we will find some, with the Arab Funds as well.

“We did not wait, asking ourselves questions about the attractiveness or otherwise of the DRC’s investment framework. We believe that by coming, we can help improve the framework by investing in it. We will be here in January 2022 to set up a commission that will monitor the work. We have already mapped out the process so as not to lose the momentum developed over the past seven months. I think we have a team that is dedicated. The DRC’s Minister of Industry, his colleague in Mines and the Minister of Finance have all been with us. We believe that we have a strong commitment on the government side,” Songwe said.

She also said that the industry will need a skilled workforce and this will encourage the establishment of higher vocational training schools in trades that revolve around battery manufacturing. And the impact on the country is expected to be huge, especially with the transfer of technology and knowledge.

Songwe said that although the continent does not have battery production technology, the project leaders are now working on having a framework agreement with those who have the technology to find out what they need and possibly come to the DR Congo for a tech transfer. They expect that a financial industry will also develop because any small and medium-sized business created around the mines will need bank loans, she said.

“We already have a few African countries that have made electric bicycles. Maybe we can also duplicate it in the DRC at a lower cost because the batteries will be produced on the spot. The DRC’s Gross Domestic Product, which is roughly $600 billion can be multiplied because the battery market alone is going to make $261 billion If the initiative succeeds.

“Suppose the DRC manages to make 10 or even 20% of this market, it will be $50 billion. Which means that we will have doubled the GDP of the DRC and that in turn will help reduce poverty. The market is also moving quickly with all the debate around climate change, and this is an African niche not to be missed.

But beyond electric batteries, what was discussed at the business forum?

There are several other value chains to develop in order to support the economic transformation of Africa.

“Obviously there is coffee that comes up the most in debates. Today Ethiopia, Tanzania, Uganda and Cameroon already are investing in the development of their cocoa, as well as Ghana and Ivory Coast in the chocolate sector; throughout the Sahel strip we see Cameroon, Niger, Mali, Burkina Faso on cotton but all that cotton is exported raw to China for processing before it comes back to the mainland. Africa has to see if it can have a value chain for this product.

“On the services side, there is a whole sector that offers added value to computer science, artificial intelligence – interesting value chains can be created in these areas especially for the job creation and wealth increase. There is also the health value chain with the pharmaceutical industry to be developed.

“Sixty years ago Africa was still in the fight for the political liberation but today the continent is at the doorstep of economic liberation. Africans must ask the right questions to get the best answers. Africa must show that it is ready, the continent’s financiers too as well as the market,” Songwe said.